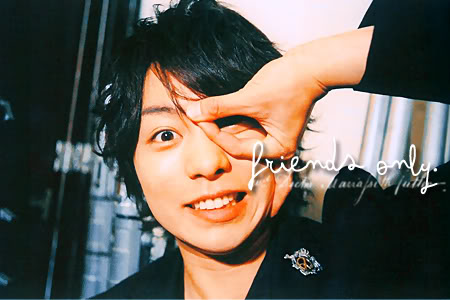 Any of you keeping the download link or know where to get HK Kouhaku Uta Gassen The 69th (end year 2018).
I have missed the entire show, and I feel bad of it. It was Sho's first Kouhaku White team MC afterall.

Please let me know if you can help me. Any small information even can really help.
Thank you in advance

You can get card with your statistics here!

How your new year?

Last year end, I turned to 30 and kinda think that I am already that old. Somehow before facing 30s I was afraid of many things, after I reach this age I don't know what I am feeling to be precise but I have a very little positive vibes in my 30. Remember my 29 was long yet busy. Working in my company really mentally hard for me but I take it easy past year and yes everything is going better when we have hopes in it.

So I will try to do it more good in this year!

I will try to keep my positive vibes way of life. Take it more easy. Do a lot of things I really want and treasure my self.

Best greetings for you. And happy Sho's month 😄

NB: And always my biggest hope...wish is Arashi concert 🥰

I wish your happiness forever because you able to bring people to feel happiness with your smile.
As O-chan said, he had never heard anyone speak ill of Aiba-chan.

Your kindness are a true and please keep shining <3

I believe you have saving so people in many times. Thanks being in Arashi, thanks for this 20th years, you are always so precious.

I understand why MJ likes to praise you as a genius.

Maybe because I'm a Sagittarius like you, somehow I understand how you feel when you want 'something we called Summer holidays / 夏 休 み'.

Even though it's sad to be apart, I want to support you

Sho represents making a statement that calms my heart that you will return sometime, and I know you really like Arashi to the point of difficulty.

In the last 30s, it's 39 years old. I hope you enjoy it Ochan, you will still be my Ni-ban because of your ability and thank you for being with Arashi for 20 years.

I am very grateful.

Yes. Arashi was my dream all over these years.

I just try to keep support them.

And thank them from my bottom heart.

Arashi, thank you for all these 20th years. Will continues to love ❤💛💚💙💜

I want to share which drama I watch in this season (Autumn Drama 2018).

The heroine : Aragaki Yui (Gakky) play as Akira, a capable and nice personality OL. However her work never easy because she have to handle everything literally when it comes to her boss and unreliable junior. She naturally has cheerful, so she always tried her best with smile on her face. She actually worrying many things, example her almost hollow relationship with her boyfriend. Kosei which played by Matsuda Ryuhei is hero of this story, his girlfriend just break him for marriage. Akira and Kosei is same regular of a certain bar. Their love-line is start when Akira and Kosei find that they are currious a bit about each other life.

What a promising cast seeing this two act togather. Story is about a genius youngster Suzuki Daiki who have photographic memory played by Nakajima Kento trapped in situation which made him contribute a 'money-delivery' crime. It makes him encounter Kai Shogo-competent lawyer who works for Yukimura Uesugi Law Firm yet very arrogant and always win with whatever it takes. Kai Shogo played by veteran actor Oda Yuji, help Daiki with some certain condition : Daiki have to disguised as another person and work  as a lawyer under him. Daiki always want to be lawyer yet he can't because he had blacklisted from Country law test in past. It's getting more interesting since we can't predict their case later.

To be honest I am only expecting Matsu-nii (as heroine fiance) at first but I have a feeling that I would like this kind romance since it will make me sob, so finally I give a shot.

The casts is surprising, I never watching Toda erika playing pure romance and moreover the hero is Murotsuyoshi (!?) I believe that is a regular comments for first impression. The story from start themed with alzheimer of heroine Nao. Nao is planning to get married with Yuichi, they get know others from marriage match-making and found each other being similar so they easly decide to marry. However, Nao accidentally met by fate with the author of her favorite novelist those who don't write anymore and live in nothing. Nao's interest in her novelist Mamiya Shinji played by Murotsuyoshi make her decide to foil the engagement. Seeing Toda erika potrayed as clever and elegant woman who falling in mad in love with comedic Murotsuyoshi male lead is feel a bit awkward yet they have some chemistry between. It is a new thing to watch.

Okay I see this one because of 'ikemen' Nakajima Kento.

Dorokei is shorten for Dorobou Keiji (Thief Detective). It is manga based drama. Enken who is a big veteran, played as most skilledlegendary thief Kemuri Garasu who never found by anyone because never left a single evidence except a certain scent. Madarame Tsutomu (Nakajima Kento) is new promotioned police officer to 3rd Investigation Division of the Metropolitan Police Department which investigates thieves. Tsutomu character is very far from a police officer, more precisely detective. He even don't want to be detective from start, but from the smell he accidentally recognize legendary Kemuri Garasu when he drink at a bar. The story is about a thief that helps detectives capture thieves from behind the scenes, a comedy and easy drama for just entertainment.

I don't expect my self to watch this drama. But I want to see how much Shuhei is growth. Nomura shuhei play as Miyasaka Tatsuhiko : an otaku, clean freak unpopular man. Ideas of this drama is very good, gouvernment made their citizen which age 25-39 yo, single and don't have children to participate married match-making. Every candidate can only turned married match-making partner who choosen by lottery 2 times or they got to serve the country to fight terrorists. Miyasaka Tatsuhiko who never have romance experiece actually quite exciting for the governman program. This drama also has many unique character which appear with their own complex. Will Tatsuhiko get a marriage partner?

I am planned to finish all the series !

Moreover I want to add more on the track :

(Update) early dec 19,
# Boku to Shippo to Kagurazaka
Aibachan, sorry to takes so much time for watching this. I like it so much see you in white coat and glasses. Visually spoiled.
I cried so many times with this kind of story.

6. Kyo Kara Ore Wa!
I never tought that I was really enjoy the series because of this duo Acting, the OST and story! Kyō Kara Ore Wa!! is a Japanese shōnen manga by Hiroyuki Nishimori, it is very famous however I never have opportunity to read it. Lead is so adorable tempatte Otoko, Mitsuhashi Takashi, and Itou Shinji (Kentaro-reason I watch this). They act so funny and I haven't get this exciting for long from a drama, specially comedy like this! Characters are so loved by viewer!

Well, I haven't fully get over with Subaru leaving K8 and JE.... And now, my respected Gussan? My TOKIO?

Just feel the sadness..... I hope everything to stabilize ASAP.

And I just can keep believe that everything will settled eventually.